As an invasive species, the lionfish have been successful in leaving their mark on the places they invade. In fact, it appears that they are entering yet another new realm: the deep-ocean coral reefs in the Caribbean, according to a new paper recently published in the PLOS ONE journal. 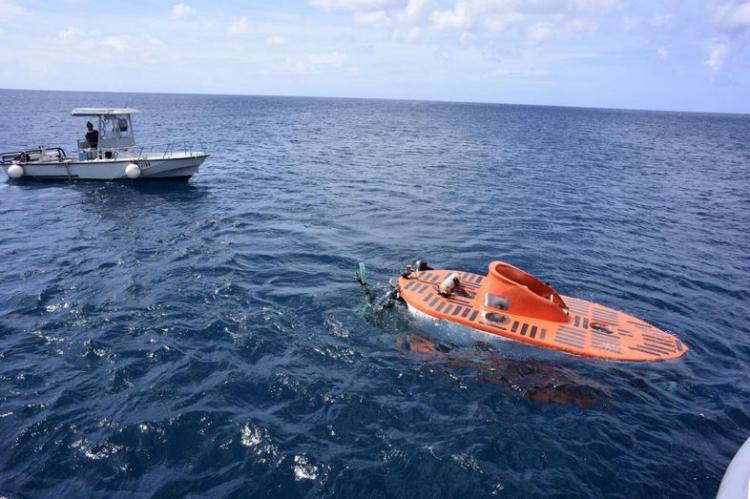 Little is known about the plants and animals living in the twilight zone of the ocean, which lies beyond traditional scuba diving depths. Scientists are just starting to explore this region of the ocean.

And just in time, it appears. Researchers from University of Washington (UW) and Smithsonian Institution recently reported the first observation of a lionfish preying upon a fish at such depths in the Caribbean, where the largely unexplored deep-ocean coral reefs are found.

They captured footage that showed a lionfish cornering, attacking and eating the fish, which turned out to be a new species. Named Palatogobius indendius (Ember goby), the fish has a bright orange stripe down its spine, and schools together in masses of about 100 fish – unlike most other gobies that hide individually in holes or cracks in the reefs. Such behavior makes it an easy target for lionfish.

"Lionfish aren't going anywhere, and we are faced with the fact that they are permanent residents on Caribbean reefs," said Luke Tornabene, curator of fishes at the Burke Museum of Natural History and Culture in Seattle and an assistant professor at the UW's School of Aquatic and Fishery Sciences.

"The hope is that the learning curve is quick and other fish realise lionfish are predators. Right now, studies have shown some prey species to be pretty naïve."

The scientists expressed concern that lionfish are now swimming to deeper reefs–as deep as nearly 250 metres below the surface off Curacao–and preying on fish living in this part of the ocean, which is largely unexplored.

"Once we discovered invasive lionfish–sometimes in huge numbers–inhabiting barely explored deep reefs, our concern was that these voracious predators might be gobbling up biodiversity before scientists even know it exists. This study suggests that they are doing just that," said Carole Baldwin, curator of fishes at the National Museum of Natural History.