The remarkable alkali fly, Ephydra hians, deliberately crawls into the alkaline waters of Mono Lake to feed and lay eggs. These diving flies are protected by an air bubble that forms around their water repellant cuticle upon entering the lake. 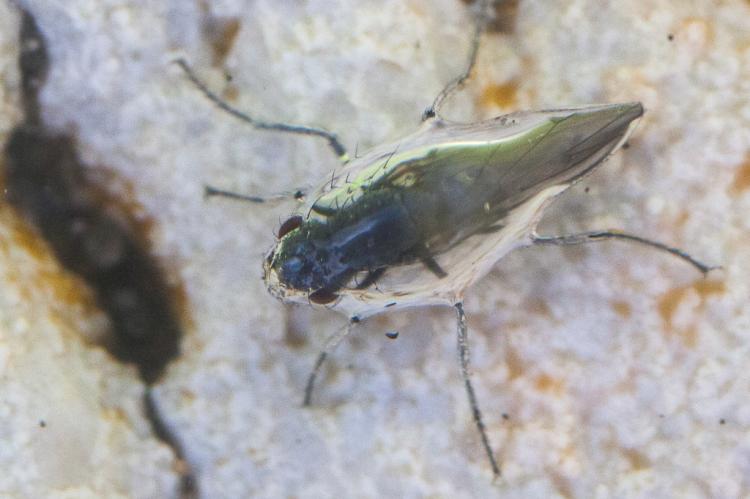 Superhydrophobic surfaces ( hydrophobic: tending to repel or fail to mix with water ) have been of key academic and commercial interest since the discovery of the so-called lotus effect in 1977.

The lotus effect refers to self-cleaning properties that are a result of ultrahydrophobicity as exhibited by the leaves of Nelumbo or "lotus flower". Dirt particles are picked up by water droplets due to the micro- and nanoscopic architecture on the surface, which minimizes the droplet's adhesion to that surface.

In Mono Lake, just to the east of Yosemite National Park: enormous numbers of small flies crawl underwater to forage and lay eggs, but each time they resurface, they appear completely dry.

Mono Lake is not an average freshwater lake. Not only is it three times saltier than the ocean, it's also full of sodium carbonate and borax—which is essentially laundry detergent. The water's high pH gives it a slippery, almost oily texture.

No fish or other vertebrates survive in Mono Lake, though algae and bacteria are abundant. Thus, for a fly, the depths of the lake may seem appealing—there are no predators and plenty of food. However, there's just one hurdle to overcome first: how to stay dry while underwater.

Scientists at Caltech became intrigued by these diving flies—scientifically known as Ephydra hians— and have now characterized the unique adaptations of the Mono Lake fly and the mechanisms it utilizes to crawl underwater without getting wet. The work is published in a paper in the November 20 issue of Proceedings of the National Academy of Sciences.

"Mono Lake has a very delicate and unique ecosystem," says former Caltech postdoctoral scholar Floris van Breugel (now at University of Washington). "Conservationists have fought hard to prevent its loss. We were interested in the Mono Lake flies not only because their behavior is so unusual, but because they are a crucial species for the lake's ecosystem and food web. Mono Lake flies are a crucial component to the local ecosystem, acting as a food source for spiders and for migratory and nesting birds."

Using a combination of high-speed video and micro-force measurements in which they plunged flies into a variety of different chemical solutions, van Breugel and Caltech biologist Michael Dickinson found that the Mono Lake fly creates a protective bubble of air around its body when crawling into the lakewater. This bubble is a result of an extreme water-repelling phenomenon called superhydrophobicity. (see fact file)

The flies are able to do this, the researchers discovered, because they are hairier than the average fly and coat their bodies and hairs with waxes that are particularly effective at repelling the carbonate-rich water. They also have large claws on their feet, which allow them to crawl on underwater rocks while resisting the naturally buoyant force of the bubble. Remarkably, the bubble does not encase the fly's eyes, allowing the fly to see underwater without the bubble's distorting effect.