It appears that the tiger sharks sampled in this study were genetically monogamous. 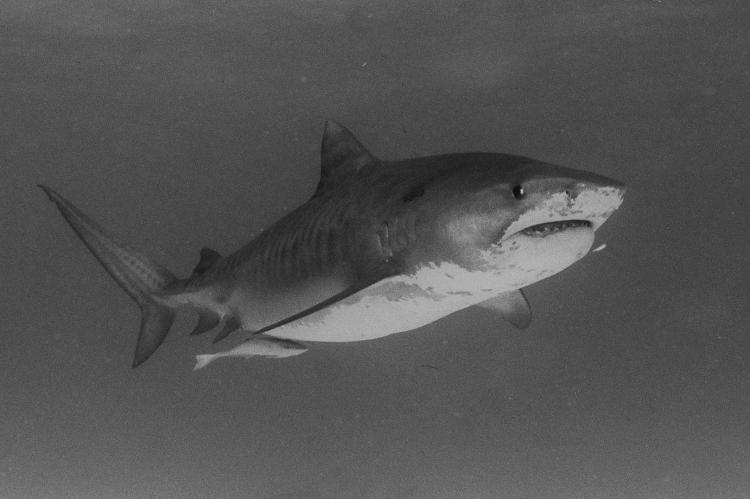 Female tiger shark (Galeocerdo cuvier) which appear to be pregrant

Multiple paternity occurs when a single brood of offspring is fertilized by multiple males. Multiple mating by females is referred to as polyandry and is one mating strategy widely documented to increase the genetic quality of offspring. In theory, certain genes or genetic combinations will raise the mean offspring fitness of polyandrous females, compared with that obtained from a single mating.

This phenomenon has been documented among many species of elasmobranchs—the subclass of cartilaginous fishes which include sharks, rays, skates and sawfish—leading to the assumption that multiple mating may be ubiquitous in these fishes. But at least when it comes to tiger sharks that doesn't seem to be the case.

The majority of studies of elasmobranch paternity have been conducted on coastal and nearshore species, with a lack of research on pelagic sharks. In the case of large oceanic species, obtaining pups from females of reproductive age remains challenging, particularly when aborting of pups is commonplace during capture. In addition, species that do not aggregate are all the more the difficult to observe during mating events.

Tiger sharks breed by internal fertilization and females only mate once every three years. The tiger shark is the only species in its family that is ovoviviparous; its eggs hatch internally and the young develop inside the mother's body up to 16 months and are born live when fully developed.

Tissue samples were obtained from 112 embryos from four litters (63 female, 49 male) captured in the Queensland Shark Control Program (QSCP) between 2008 and 2012.

Genetic analysis indicated that only one father contributed to each litter. Three litters were identified as being fathered by a single male. In the fourth litter, a single pup, out of a litter of 34, was assigned to a second father.

Genetic monogamy has been reported in only one other elasmobranch, the bonnethead shark (Sphyrna tiburo), with 22  litters sampled from the Gulf of Mexico revealing over 80% as being single-sired.