If there is any hidden secret in the Mediterranean, it is the island of Vis. For many years, it was a forbidden and restricted military area. It was not until 1991, when the iron curtain finally came down, that it was opened up for tourism and diving. On Vis, small picturesque port towns and spectacular wrecks, drop-offs and caverns are waiting to be discovered by divers. 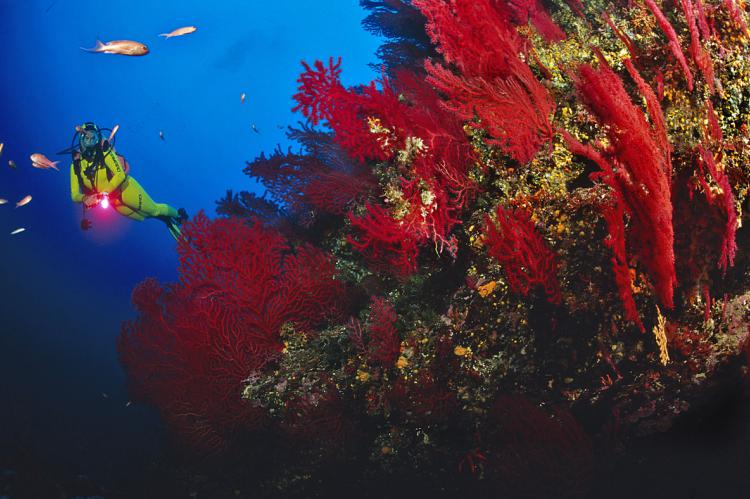 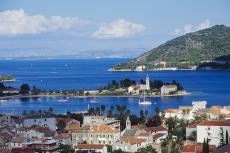 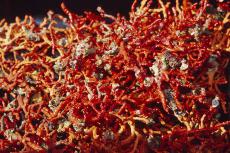 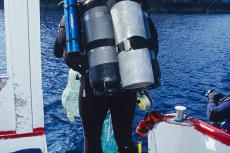 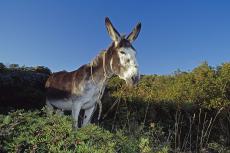 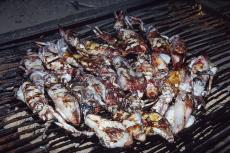 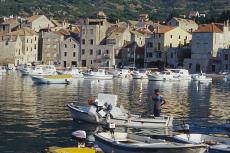 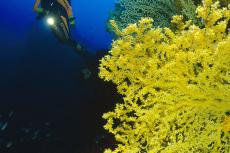 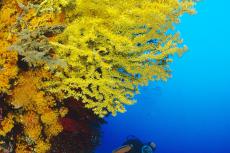 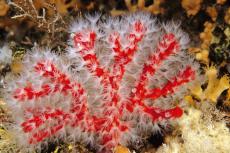 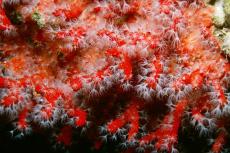 If there is any hidden secret in the Mediterranean, it is the island of Vis. For many years, it was a forbidden and restricted military area. It was not until 1991, when the iron curtain finally came down, that it was opened up for tourism and diving. On Vis, small picturesque port towns and spectacular wrecks, drop-offs and caverns are waiting to be discovered by divers.

Although I have had several hundreds of dives in Croatia, I have never seen a drop-off like this before. It is not just the vertical fall into the deep blue, but the unbelievable natural growth that impressed me. Between the numerous red fan corals, I spotted what I first thought were other bright corals and bushes. From a distance, they just looked like a yellow variety of a gorgonian, but as I got closer, the real secret of this drop-off revealed itself in the beam of my lamp. The remarkable growths in front of me were black corals, a very rare species of cnidarian in the Mediterranean.
Scientists assume that these beautifully coloured polyp colonies can reach the age of 1,800 years, and as such, are one of the longest living sea creatures in the world. Inspired, I began to position my lights. These corals were not only scientifically interesting, but also a beautiful photo subject.
Some minutes later, our dive guide Lorenz signalled us onwards. He wanted to show us a grotto full of red corals. And indeed, not far from the yellow corals, a cavern entrance big enough to contain three divers, opened up a few meters into the rock. Unbelievable, but true, the ceiling of the cavern was completely covered with precious red corals. As the bubbles from our exhalations rose to the ceiling and brushed against the furry white polyps, they retracted, leaving their fire red skeletons naked and exposed. For thousands of years, they have served as raw materials for making jewellery. These growths remind me of gnarly fingers, as they stick 10 cms out of the ceiling.
After a couple of quick shots, it was time to start our ascent. In shallow water, we had a final glide through the spacious tunnel before being picked up by Lorenz Marovic’s dive boat.

This Croatian, who is also fluent in English, has constructed his vessel from the bottom up. Marovic’s boat design includes a large dive deck and a decompression chamber, which is included not only as a matter of safety, but also to support Marovic’s professional as a commercial coral diver. In Croatia, Marovic is one of just a dozen who are licensed to harvest and sell genuine red coral.
The biggest specimens that we saw on our last dive could possibly bring in 200 Euros, which is, however, hardly worth considering. “Real” red corals would bring in ten times as much, but you would have to go to twice the depth to find them.
But we do not have much time to listen to Marovic’s tales of his work as a commercial diver. Aniska, his wife and able helmsman, has swiftly brought the speedy dive boat back to their dive centre, which they run together.

We are on the small Croatian island of Vis, which is located on the Dalmatian coast not far from the Italian border and about 45 km off the main coast. This strategically important position has secured Vis a place in history books, not always for the better.
In the 4th century B.C., Vis became the first Greek colony in the Eastern Adriatic. In a short time span, the island developed into a prosperous democratic city-state and an important centre of commerce, which soon founded its own colonies. It wasn’t until several centuries later, during the 7th and 8th centuries AD, that the Croatians arrived on the island, where they mixed with the existing population of Greek and Roman origin. The original name of the island, Issa, was soon “Croatiafied” to Vis.

It was not until the Croatians arrived on the island that it became an important navy base in the Eastern Adriatic. Countless bloody battles and changes of power took place here, and later, during World War II, it regained its strategic importance. Vis became a base for Allied Air Forces and Navies, and was, at one time, also the headquarters for the staff of commander Josip Broz, more famously known as Tito, and later, as president of Yugoslavia.
Its unique location as a strategic stronghold and outpost in the Adriatic unavoidably made Vis part of the war. Even 45 years after the war, most of the inhabitants were military personnel. For this reason, the island has been completely off-limits for foreign tourists. No investments in infrastructure or tourism were made on the island, since only the needs of the Army and the few inhabitants of the island were accommodated. The only factory on the island was a small textile manufacturer, which supplied the military.
It was not until the 1970’s when two hotels, one in Vis and one in Komiza, were built to stimulate a bit of tourism on the island. But because only domestic Yugoslavian tourists were permitted to go, it was all just an exercise in futility. The only enterprises that really functioned were the ancient wine growing and fishing industries.

When the military finally evacuated island in 1991 and the long-standing travel restrictions were lifted, Vis was a virgin destination. Even to this day, more than 17 years later, the island retains its original charm.
There are only a limited number of hotel beds on the island, of which most are private bed and breakfasts. So, even in the high season, Vis hasn’t got more than 4000 inhabitants and will not turn into a tourist hell like so many other places in the region.
A majority of the few guests that visit the island are Italians, who arrive by ferry from the ports of Ancona and Pescara on the opposite coast of the Adriatic.

From a diver’s point of view, we can thank the military for hiding these little secrets for so many years. Long stretches of coastline and the surrounding archipelago have hardly been dived at all. The impressive cover of marine life, as well as the many wrecks and caves that lie further north, put the more famous dive sites in the Northern Adriatic to shame.
Under the huge gorgonians, you can find red corals of considerable size, even at air diving depths. It appears that the years during which the island was off-limits have protected and preserved Vis in a historic time capsule. Independent of Croatian dive regulations that were enforced in more recent years, Vis has already been using licensed dive guides for six years. Thanks to this diligence, underwater archeological artefacts, which date all the way back to ancient Greek and Roman eras, have remained largely intact.
What you see topside on Vis is also quite attractive, thanks in large part to the artesian wells under the island, which provide a plentiful supply of freshwater that makes the island one of greenest in the entire Adriatic.
Apart from the typical Mediter-ranean vegetation, wine also seems to favour the sandy soils of the island. From their grapes, a full-bodied red-wine, the “Plavac mali“ is produced. This wine will please the palate of any discerning visitor with an interest in wine. Add some grilled fish, fresh out the ocean, or a lamb chop with some potatoes and rosemary, and what more can you ask for?

Blue Grotto. A very impressive cave, which is not to be confused with its more famous name sake on the island of Capri. From the little island of Bisevo in front of Vis, you either swim or dive through a narrow tunnel in shallow water. After a few meters, you will arrive in an expansive hall, which stretches out before the visitor. It seems possible to enter only through this entirely submerged, but huge entrance, which is illuminated by reflected sunlight from above, which paints the ceiling of the huge vault blue. Past a ridge of rocks and some other weird formations, it is possible to reach the bottom of the cave at a depth of 20 meters. Right after that, a drop-off follows.

Teti Wreck. A partially well-preserved shipwreck in 7 to 35 meters depth that is easy to dive. The 70-meter long Italian freighter wrecked on the northern coast in 1930 after running aground due to a navigational error. The bow is completely destroyed. The wreck is erect, resting at an angled slope, with the stern covered by beautiful coral growth. The steering wheel is an excellent photo subject. Quite often, you will see conger eels on the wreck.

Vassilios Wreck. Resting on its port side off the northern coast of Vis, this 104-meter long Greek freighter remains in an excellent state of preservation. Laden with coal, it ran aground under mysterious circumstances on the night of March 18th, 1939. Since no one was injured, it was suspected that it was intentional, and probably a case of insurance fraud.
The bow and gigantic anchor are the shallowest and easiest part to dive. The stern, with the richly encrusted propellor and rudder, should only be visited by experienced and appropriately trained divers, since it is located at a depth of 55 meters.

Totac. A fantastic and richly overgrown drop-off that extends down to great depths. It measures up to anything that you could see in the tropics. A rocky ridge runs from the island and seems to disappear in the bottomless clear blue abyss. The region of about 30 to 40 meters of depth seems to be covered with red and yellow gorgonians and countless cup corals. There are small caves in which it is possible to see red corals. Stately langusters are everywhere. In shallow water, there is another cave to tempt divers.

Seal’s Cave. An extensive, yet uncomplicated, cave to dive on the island of Bisevo. It is named after the colony of monk seals that, until a few years ago, took up residence in the rear of the cave. Here, it is possible to exit onto the beach, which was once the peaceful refuge of the seals. Aside from incredible visibility, it is also possible to locate rare creatures such as orange cleaner shrimps and porcelain snails.
This trip was supported by Manta Diving Centre. ■ 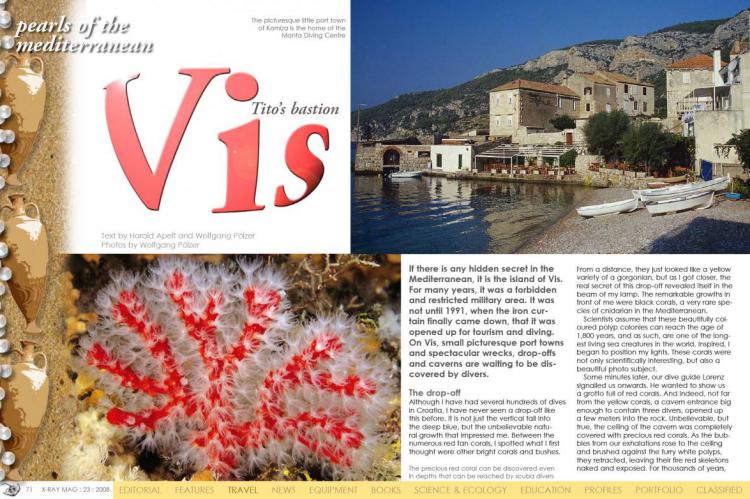 In X-RAY MAG issue #23, Mark Webster takes on a tour through the fascinating underwater world off Cornwall, England. We talk with Pascal Bernabé for insights into his achievements in deep diving. Science editor, Michael Symes, investigates locomotion of sea creatures, and we look at Hammerhead sharks and their unique head shape. Harald Apelt brings us to another pearl in the Mediterranean -- beautiful, historic Croatia. Kurt Amsler discusses proper workflow in digital photography. Rebreather pro, Cedric Verdier, gets us up to speed on physical fitness for divers and DIR for rebreather divers. Girldiver Cindy Ross discusses sunscreen and gives us the skinny on sunrays and skin cancer. We meet the Bubbling Reefs of Denmark, and a diverse portfolio of ocean art from artists around the world tops it all off. Plus the news -- on marine ecology, discoveries, ship wrecks, conservation, equipment, travel, divers, record breakers, books and films, turtles, sharks, whales, jellyfish and more... 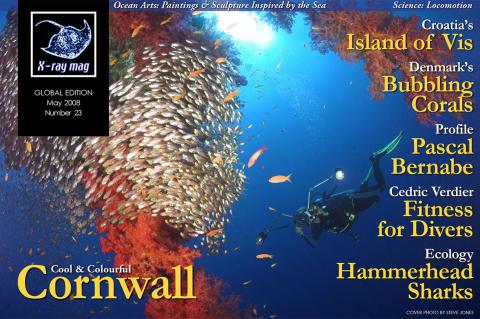