Skip to main content
Home ⎢Why are not all sharks streamlined?

Why are not all sharks streamlined?

After studying the body composition of 32 shark species, a team of researchers has concluded that sharks have managed to evolved different physical attributes based on the ecosystems they live in. 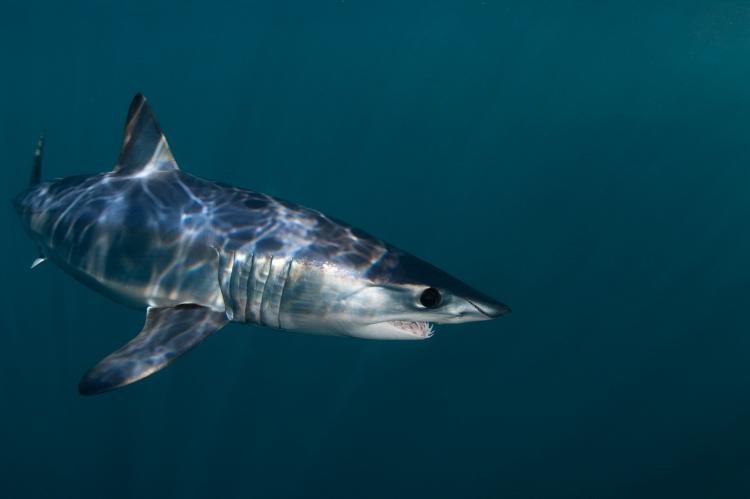 The shortfin mako is on record as the fastest-swimming shark, capable of bursts of speed up to 68 km/h (42 mph).

For instance, sharks that live in dark, cold and nutrient-poor oceans (like the bramble sharks or birdbeak dogfish) have big fatty livers that make up more than a quarter of their bodies. As a result, they are bulkier and less hydrodynamic. Nevertheless, they are able to survive because in their part of the world, slow swimming is the order of the day—for both the predator and the prey.

"They are the zeppelins of the shark world, cruising near effortlessly at low speeds to save energy," said biologist Adrian Gleiss, PhD at Murdoch University Centre for Fish and Fisheries Research. He is the lead author of a paper describing the findings of his team’s study, which was recently published in the Proceedings of the Royal Society B journal.

At the other end of the scale are sharks with smaller livers—they are negatively buoyant and therefore have to swim fast so that their fins can provide sufficient lift. Such species had evolved a more efficient body that could maximise their energy expenditure.

Jean Potvin, PhD, professor of physics at Saint Louis University, elaborated: "As with the sharks inhabiting shallow waters, trying to fly zeppelins at the speeds and accelerations common to fixed wing aircraft of same the weight class would require significantly more energy, unless that is, it is reshaped into a more javelin-like body."

"It would follow that slimmer, and thus more hydrodynamic sharks will require less energy for swimming at the high speeds necessary to catch agile prey, especially in environments where fast swimming is common,” she added.

This study has shed light on how the environment has shaped the evolution of marine fish from bottom-dwelling to those capable of swimming at a range of depths. “It is incredible to think that many hundreds of million years ago, the early ancestors of fish only lived near the sea bed, sporting heavy armour that prevented them from swimming in mid-water,” said Gleiss.

“Sharks represent a relic of this time and were probably among the first fish to exploit most depths of the ocean. Our study contributes to our understanding of the evolutionary processes that led to them being such a successful group.”