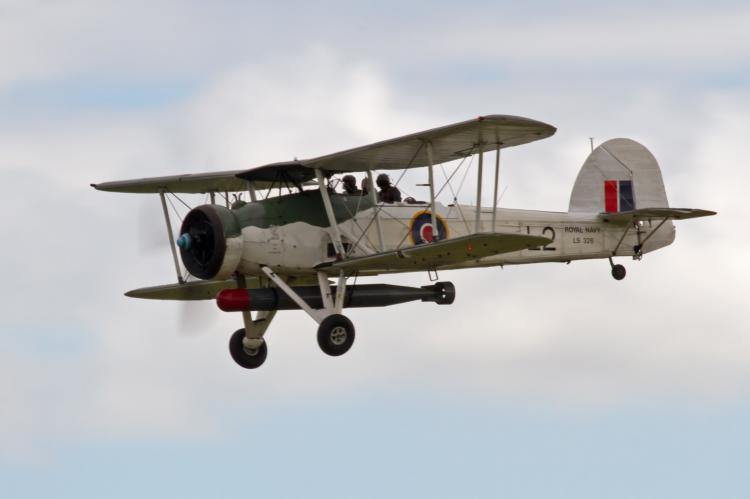 Fairey Swordfish seen in flight in 2012

Despite being already considered obsolescent at the outbreak of the conflict in 1939 the biplane was nonetheless in frontline service throughout the Second World War and achieved some spectacular successes such as sinking one battleship and damaging two others of the Regia Marina (the Italian Navy) during the Battle of Taranto in 1940, and its role in the sinking of the German battleship Bismarck in 1941.

The Swordfish also flew a high level of anti-shipping sorties in the Mediterranean, many aircraft being based at Malta. While there were never more than a total of 27 Swordfish aircraft stationed on the island at a time, the type succeeded in sinking an average of 50,000 tons of enemy shipping per month across a nine-month period. The recorded Swordfish losses were low, especially in relation to the high sortie rate of the aircraft and in light of the fact that many aircraft lacked any blind-flying equipment, making night flying even more hazardous.

The discovery of the wreck was part of a long-term project by Chris Clark and colleagues at Harvey Mudd College in California to bring robotics to archaeology. His team has developed computer systems that use artificial intelligence (AI) to help better analyse images of the sea floor, as well as algorithms to improve the search and navigation of a target area.

During the second world war, Malta was an important Allied base and was heavily bombed by Axis forces, resulting in many planes and ships sinking to the bottom of the Mediterranean Sea. This makes it a hotspot for wreckages and the perfect testing ground for underwater autonomous vehicles. “It is dangerous and time-consuming to send divers to look for wreckages, so obviously, we need to get robots down there,” says Clark.

The team found the bomber in 2017 but as there are plenty of people who are interested in finding sunken treasure the discovery has been kept under wraps. The team is currently in discussions about making it a protected site and until then, they won’t reveal its location for fear of treasure seekers stealing parts of the plane. “It is a piece of history,” says Clark.