Are you curious about marine life in remote polar seas? You might want to book mark Felix Butschek's social media pages. 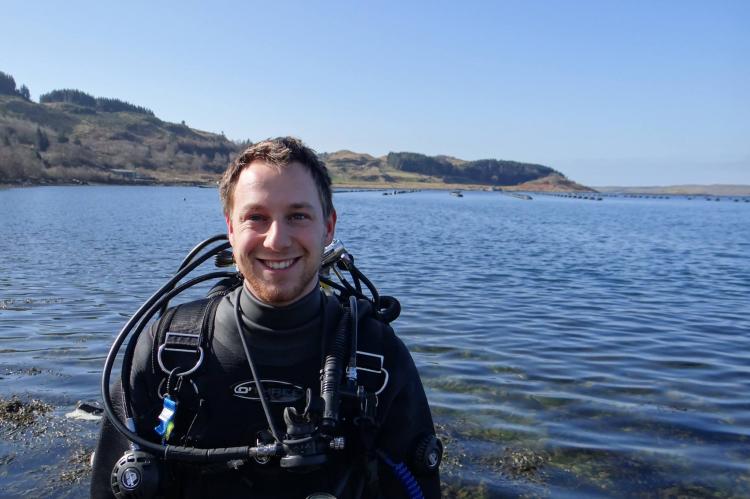 This year's European Rolex OWUSS 2016 / 2017 Scholar is most enthusiastic about temperate and polar marine environments. And it all started because his school was located in the spectacular coastal waters of British Columbia. Vancouver Island is a mecca for temperate water diving and one of the world's top dive destinations.

Felix grew up amid the alpine mountains of Austria in Innsbruck away from the sea. This all changed in 2009. Felix was awarded a full scholarship to complete High School in Canada at Pearson College, Vancouver Island. He chose to study a marine science class at the Lester B. Pearson College of the Pacific. He was soon scuba diving!

Felix was immediately hooked on the wonders of the marine environment, and spent every free minute at the local Race Rocks Marine Reserve, diving and sailing along the south coast of Vancouver Island. By the time he finished school Felix had attained his PADI Divemaster qualification and realised that he wanted to pursue a career in underwater science.

Following a year in social service in Austria, in 2012 Felix headed to the UK, specifically the west coast of Scotland. He joined Scottish Association for Marine Science (SAMS) and studied Marine Science with Arctic Studies. Whilst there Felix became a member of the British Sub Aqua Club, subsequently training as a BSAC assistant instructor.

During his time at SAMS he was fortunate to be part of the team that helped discover and then identify several WWII flying boats near Oban. This fascinating endeavour sparked his interest in underwater archaeology and sonar technologies. He then turned his attention to scientific diving, completing a five-week course with with the Alfred Wegener Institute for Polar and Marine Research.

In 2014 - 2015 Felix spent an Erasmus exchange year on Svalbard, at 78°N in the Norwegian Arctic. The extensive fieldwork included two week-long research cruises in marine geology and biology. Consequently Felix chose to dedicate his BSc dissertation and research project to the study of climatic variability and ice sheet dynamics in an area of western Svalbard. This was because it reflected his interest in climate change from glacial-interglacial cycles to anthropogenic warming.

In January 2016, Felix participated in an advanced training course on stereo-photogrammetry with the UK National Facility for Scientific Diving. He is keen to develop 3D visualization further and apply it to study and to convey the natural beauty of the marine environment and share his passion for the remote polar seas.