Henry Nelson. Does the name ring a bell? You’ll not find him in any history book or see any monuments to his honor. However, the thousands of scuba divers who visit Vanuatu every year should bless this name. This former French/English colony, which was named New Hebrides till 1980, was also the second most important US base in the pacific during WWII. The 80 islands strategically located between Fiji and Australia is still home to some remains of this strange time. Amongst them is the wreck of the SS President Coolidge.

This huge luxury cruise liner used to travel between San Franscisco and the Pacific Rim before being transformed into a troop carrier in 1941, under the same captain, Henry Nelson, who was already 63 years of age. October 26th, 1942, the SS President Coolidge came back to Espiritu Santo carrying more than 5,000 US soldiers and a whole load of military and medical supplies.

Because of a communication problem, the captain was not made aware of a mine field that was laid down around Luganville, the main harbour in Santo, to protect the area from lurking Japanese submarines. At 09:30, there was a loud explosion. The ship struck two mines. After having considered his options, the captain decided to beach this 200-meter long ship on the nearby shore. All the men on board were able to safely swim and walk to the shore.

But due to the shape of the seabed and the tide, the luxury cruise liner sank on a gentle slope at a depth of 20 to 70m, only an hour later.

Today, the SS President Coolidge has become the biggest, most accessible wreck in the world—a dream come true for scuba divers all over the world. Now divers can just walk into the site right from the beach, swim 50 metres and explore this huge shipwreck.

Everything is interesting on what the local divers call, “The President”. Thousands of fish swim around or stay protected in the cargo holds. Huge groupers and moray eels are so accustomed to divers that they act like pets, distracting visitors from the impressive number of jeeps, vehicles and military supplies that lie everywhere. With nine decks, the wreck is so complex that it looks like a maze—a feeling intensified by the fact that the ship rests on her port side. Navigating inside the wreck could be quite challenging, except for the native dive guides who find their way to the most interesting artefacts on a daily basis.

Maybe the most amazing feature of The President is her good state of preservation even after more than 50 years on the seabed. Twice a day, avid wreck divers explore this ‘Titanic of the shallows’. Through the hull—which has been opened up several times for salvaging operations—the divers swim into a living museum full of helmets, gas masks, guns and china. Divers look for the barbershop, the post office or the huge machine room. They take pictures of the several guns that were supposed to protect the ship from the Japanese threat she never met. They dream about the peaceful time when rich passengers were swimming in the multi-coloured swimming pool that now rests at 55m. Then they stop and quietly contemplate the symbol of this forgotten cruise liner—a bas-relief that used to be in the first class smoking room named, ‘The Lady and the Unicorn’.

The history of the SS President Coolidge

Launched in 1931, during the Great Depression in the US, by Dollar Steamship line (after its owner Robert Dollar!) the SS President Coolidge and her sistership SS President Hoover are among the most luxurious ships of their day. Designed to carry 1000 passengers and 380 crewmembers, they both boasted a gymnasium, a theatre, two swimming pools, a ballroom, a library, a barbershop, multiple smoking rooms and dining rooms. Their immense size—200m long by 25m wide, and weighing in at almost 22,000 tons—made these vessels the biggest merchant ships of the 1930s. Two huge propellers give them the ability to reach 21 knots and the SS President Coolidge went on to hold the speed record in the Pacific Ocean twice. Only a few years later however, the President Hoover would end her life on the shores in Taiwan.

The SS President Coolidge came to a similar end, but not until 1942. She was repainted green. All her precious wooden furniture was removed and guns and extra toilets were installed. Why? To carry four battalions, light tanks and all the supplies including the malaria drug, quinine, for the Pacific operations. For months, the US Navy tried to prove that her captain (a merchant navy officer) was the main person responsible for the tragic loss of the ship, strongly refuting the fact that no information about the new minefield was ever sent to the ship.

Only an Artillery officer and a fireman was killed, the rest of the passengers calmly waited to climb into a rescue boat or simply climb down a ladder and walk to the beach.

The minefield never hurt any Japanese targets, but sank an American destroyer, the USS Tucker, just a few weeks before they caught the SS President Coolidge. At the end of the war, various Australian and French companies salvaged the two shipwrecks for their propellers and contents in their cargo holds.

The Americans in the New Hebrides

200,000—That’s the number of US soldiers who were sent down through Luganville, the main city of Santo Island, in 1942. Before the invasion, Luganville used to be a small trading post with a few hundred inhabitants. But in just a few months, the troops built up an entire city, with a square grid of streets full of jeeps. As the main base for the US Army in the Pacific, Santo became the starting point of all the military operations around Guadalcanal and the Solomon Islands. Fifty years later, almost everything is still there: buildings and Quonset huts (standard size: 30 x 12m) are now used as workshops. Commercial airlines took over the airport that was used by the Corsair fighters. But at the end of the war, all the trucks, jeeps, cranes and forklifts of the US Army were dumped into the sea, as they became useless and too expensive to bring back to the US.

This dive site, now known as Million Dollar Point, is an impressive pyramid of vehicles from 40 metres deep up to the surface. Nature came back and lots of fish swim between tires, trailers, half-tracks and bulldozers—a very strange vision of American logistics, fully appreciated by the tourists to whom the locals kids sell small bottles of Coca-Cola they’ve apparently found in this huge historical junkyard. ■ 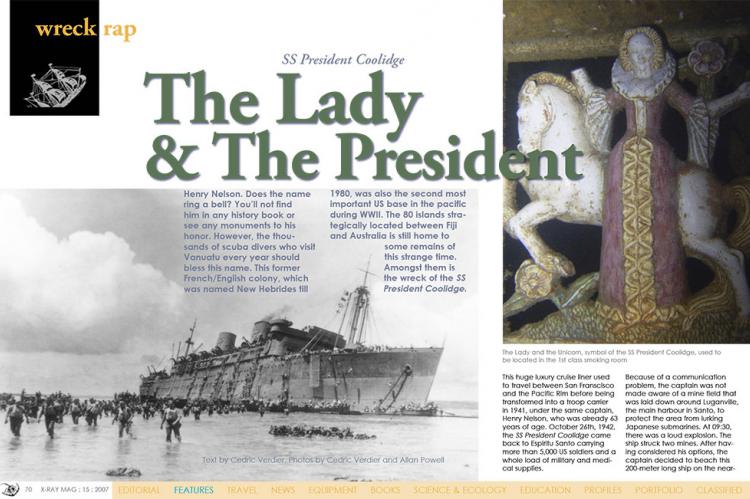 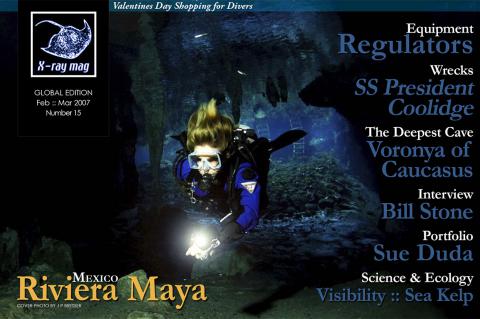