The Seattle Times has just issued an update on a story that we have been following since the summer of 2014. 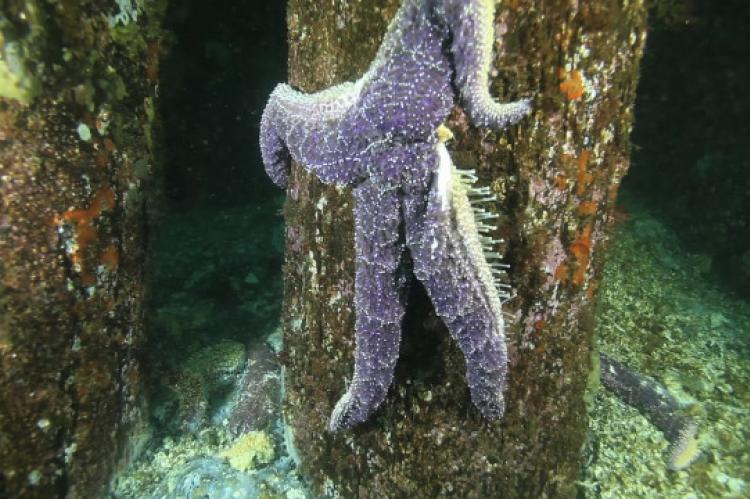 In June X-Ray Mag correspondent Scott Bennett reported on a "Mysterious Disease Decimating Oregon Sea Star Populations". He wrote "a mysterious disease affecting sea stars has erupted along the Oregon coast. Sea star wasting syndrome causes the creature’s body to disintegrate, ultimately leading to death. Up to half or more of the creatures along the coast have been infected in just a matter of weeks.

Six months later, in December 2014, a virus had been identified as the culprit behind the infectious disease that was wiping out millions of starfish along the US West Coast.

West Seattle environmental advocate Laura James had noticed it too. Her film 'Solving the Mystery of Dying Starfish' won her the 2015 Emmy Award in Environmental Feature / Segment.

Now Lynda V. Mapes of the Seattle Times has reported that scientists studying why starfish from Alaska to Mexico suffer this devastating wasting disease may have found a clue. Rising ocean temperatures. In 2014 the ocean temperatures were unusually warm. This coincided with the sick starfish syndrome.

Drew Harvell, professor of ecology and evolutionary biology at Cornell University and a co-author of the study stated, "we were able to show warmer temperatures were related with the higher risk of disease. We suspected there was a temperature link, but we really needed to look at the field data to pull that out, and we were able to back that up with lab experiments that found that in warmer temperatures, they died faster.”

You can read Lynda V. Mapes full report in the Seattle Times here.