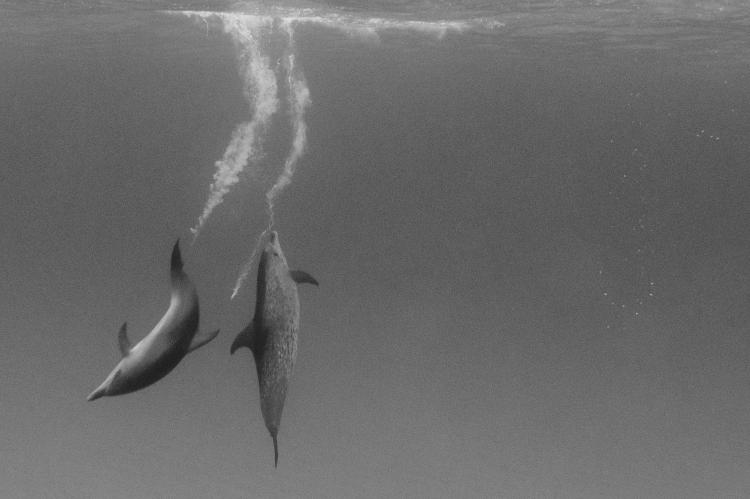 Instead of wearing earplugs at a rock concert, imagine you could simply tune a dial inside your ears to lower the volume and protect your hearing. In a new report published in Integrative Zoology, researchers have discovered four whale species and dolphins can do just that. This could potentially shield the animals from navy sonar and oil drilling, linked to at least 500 marine mammal deaths since 1963.

Many species of whales and dolphins have supersensitive hearing because they use sound to navigate, a process known as echolocation. They make clicks that they’re able to hear bounce off objects as small as a ping pong ball 20 meters away. Some hear high-pitch frequencies up to 100 kilohertz (kHz), which is about 80 kHz higher than the upper limit of human hearing.

This makes them particularly susceptible to loud blasts of sound in the ocean. The U.S. Navy uses underwater sonar to find enemy submarines, underwater mines, and determine water depth, but the pulses can be so loud as to cause temporary hearing loss in some marine mammals, which may cause them to strand themselves on beaches and die.

After being sued by environmental groups, the U.S. Navy agreed to curtail training activities in important whale and dolphin habitats. In addition, seismic surveys utilizing loud air guns for oil and gas exploration are prohibited from these areas. Yet, effectiveness of these techniques has never been proven, and the regulations are indecisive, wavering between prioritizing the environment, national security, and the oil and gas industries.

In 2008, researchers at the University of Hawaii in Honolulu began to suspect some marine mammals could protect their hearing naturally. The team used suction cup electrodes to study marine mammal brain activity during echolocation. Their captive false killer whale heard her outgoing clicks at a quieter level than equivalent signals presented right in front of her, indicating she could adjust her hearing sensitivity when she knew the impending sound would be loud. Her hearing sensitivity increased when her trainers asked her to find something far away.

The team collaborated with scientists from Russia and the Netherlands to study this effect in a bottlenose dolphin, a harbour porpoise, and a beluga whale, in addition to extending the study on the false killer whale. The animals’ brain activity was measured while hearing sounds loud enough to evoke a response, but below the threshold of causing temporary hearing loss. Each of the captive animals learned to reduce its hearing sensitivity by 10 to 20 decibels when the scientists played a warning signal before producing the loud sound.

“That’s similar to a human putting in foam earplugs,” said team leader Paul Nachtigall, a marine biologist and director emeritus of the Marine Mammal Research Program at the Hawaii Institute of Marine Biology in Kailua. “It’s really fascinating to be able to have that switch inside of your head.”

This natural muffling ability suggests that military researchers and petroleum exploration companies could produce warning signals at sea before setting off their test explosions. However, is this likely to be more effective than the current technique of slowly raising the volume? That’s “the empirical question,” Nachtigall said.