Researchers find out why two species of hermit crabs, found on some coral islands in the Maldives, can live on the same beach, and not fight over the shells they use for "housing." 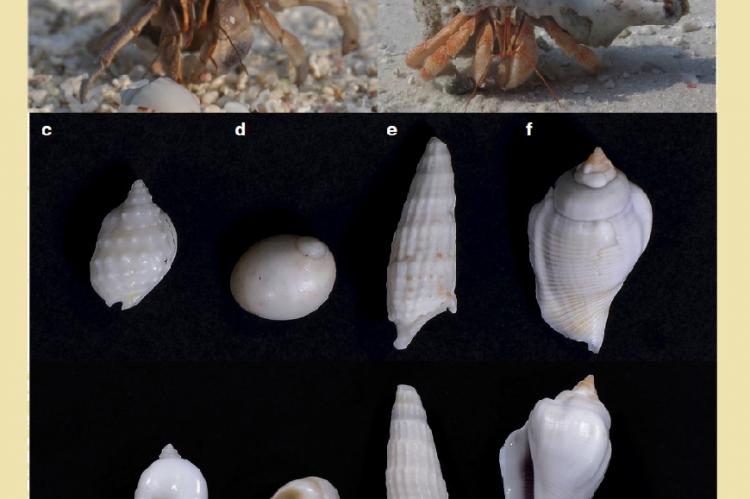 The two hermit crab species (Coenobita rugosus on the top left and C. perlatus on the top right), with the four shell types used in the research

Researchers from the University of Bayreuth, Germany discovered how two hermit crab species co-exist on the same beach without fighting over limited resources like food or shelter.

Sebastian Steibl and Prof Dr. Christian Laforsch sought to investigate how resource partitioning occurs and whether it may be a driver of coexistence between competing species. (Resource partitioning involves similar species in the same environment utilising different subsets of the same resource (or using it in a different way), so they are not in direct competition with one another.)

The two species in question—Coenobita rugosus and C. perlatus—live on the same beaches of 11 coral islands across the Maldives.

In early 2017, the researchers collected 150 hermit crabs each of both species from the beaches of Naifaru, together with 150 empty shells of different shapes and sizes.

In the lab, the crabs were removed from their shells and each was presented with two empty shells of different shapes. After an hour, the researchers noted which shell the crabs chose.

It turned out that the two species had specific preferences. The C. rugosus chose short, spherical shells while the C. perlatus preferred elongated shells with a narrow opening.

It was concluded that the hermit crabs made their choices based on the shell’s overall shape and structure. Steibl added that the preferences may reflect different survival strategies adopted by each species due to environmental pressures.

According to him, “further research is needed to investigate why the different species evolved separate behaviours when facing the same stressors, but we know that heavy, narrow shells decrease the risk of predation but limit clutch size and require more energy to transport. Lighter, round shells allow for greater clutch sizes, are easier to move around and are more suitable for burrowing, but increase susceptibility to predation."

After the experiment, the hermit crabs and shells were returned to their original habitat. The findings of the study is published in the BMC Ecology journal.